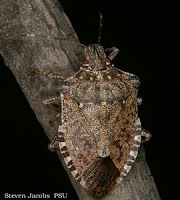 Halyomorpha halys Stal aka Brown Marmorated Stink Bug is an exotic pest that has been making it's way west since the late 1990's.  It was first collected in Pennsylvania in 1998 and I received a call a little while back from a pest control company letting me know that they found a few here in the valley.  Now, it has yet to be confirmed that they have a breeding population in Arizona but chances are if there is more than one then they are establishing themselves.  And really, what creature wouldn't want to live and populate here?

This "stinker" is a member of the order Hemiptera and is considered a true bug.  True bugs have a piercing sucking mouth that they "plug" into their "food" to access the nutrient rich fluids just under the surface.  Other members of this group include aphids, shield bugs, assassin bugs (great predators), kissing bug, bed bugs (ooo yucky) and the list goes on.

Back to our brown stinker...this is a native agriculture pest in Asia and is a serious pest of fruit, vegetables and some farm crops. They have 5 instars and as adults are about 1" in length.  They can be several shades of brown, have lighter bands on antennae and are actually quite attractive.  Now like other "stink" bugs, they have nasty scent glands which we don't find very nice and which they like to use when alarmed.

To control, simply physically remove them from your plants.  With a sheet under plant, gently shake until all have fallen off.  If they become stinky clingers then use some form of wiping motion to remove them.  You can also use a spray bottle with a little bit of dish soap and water to spray down the plant.  Discard far away in the trash can and in a container that they cannot escape.

Update: 6/8
It was brought to my attention that I should mention the traveling capabilities of stink bugs.  They like to get in the walls of RV's and go for rides.  In areas where people congregate with RV's like Quartzside, Yuma and other destinations it is a good idea to keep a look out for stink bugs and do our best not to transport them to areas where they do not belong.  A major component of IPM is keeping an eye out for pests, especially "exotic" pests that we tend to unknowingly carry around.
Posted by Community IPM Leadership Team at 9:12 AM

The Community IPM team is dedicated to providing up to date and accurate information to help create a healthier environment inside and out. With these highly trained specialists this blog will be able to help provide accurate and timely support for your pest management needs.

Subscribe to IPM Tip of the Week by Email